THE ART and life OF SCOTT AICHER 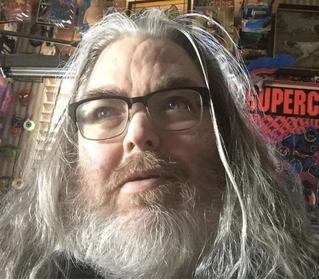 All rates may vary more/less depending on detail and time to create. Please contact me (Scott) here in the contact link with your kustom painting idea and let me know your budget for the project. I look forward to working with you.

As a child I made my first paintings at age 5. I painted with my Mom and Grandmother often. I won three blue ribbons for my paintings in Redondo and Manhattan Beach art shows in the 70’s and decided to make art my path soon after that. After getting help and therapy in my mid 20’s I found out I am bi-polar and I have been sober many years now.


Although my art is very Psychedelic it comes from stream of conscious imagination. I need a clear sober focus to create the amount of art I make. At my professional day jobs I learned to have a strong work ethic and how to work effectively and fast. I worked as an artist for many years at print shops and design companies. When my day job (working as an illustrator for a surf wear company and other entertainment companies) was downsized I began to show my paintings at art shows.After ten years of successful art shows I decided to open my own shop. I wanted my Shop to look like my home studio...A sort of mini gallery featuring my paintings.


I opened Pop Kustom Shoppe at a local craft market. business was good until the market slowed and became more about crafts and not “weird art” like mine. After four years I went back to working from my home studio and started to focus more on art shows again and selling my art online. Although I have many years of on the job art experience and often taking classes at some of the best schools when I could (such as Art Center College of Design) I remain mostly a self-taught artist.


I am inspired by Sunday Morning Newspaper Funnies, Comic Books, Underground Art, Album Cover Art, Surf and Skateboard Art, Illustration books I used to read at the public library as a kid, Vintage Bubblegum Cards, Mad Magazine, Art History and Modern Art. I collect Vintage and New Toys, Guitars, Record Albums, Art Books and Comics. The fandoms I follow are mainly collecting Kiss records and I do like Star Wars. I am a member of the vinyl collecting community on you tube. My favorite food is Brown Sugar Pop Tarts or a nice bagel with a schmear. I love a good cup of Coffee or English breakfast tea. I live with my Teacher Wife and little dog in a cottage home that we worked hard to get. We have a view of the Los Angeles Harbor from our back porch and my wife has a great garden. I try to paint every single day if I can.


I have a website (Scottaicher.com) or (popkustomshoppe.com) that has links to my online shops and Blog. It also has a portfolio page of samples of my art and listings of my current art shows.What I try to put most in my art is Love and Passion. I am trying to show that sometimes strange and unusual can be beautiful.I hope to meet you all at my art shows. Thank you so much for your continued support. It means everything to me.

Scott’s fine art career began at Sacred Grounds Coffee Shop’s old location in San Pedro, California showing in a show called Blatant Localism in 1996 with the local artists from from the Harbor Area that made art for punk flyers, album covers and record stores. Craig Ibarra, Victor Gastelum (Both worked at Sst Records in the art department)Aaron White and Rodger Mejia were the other artists in the show) Mike Watt’s band The Madonna Bees played the show in character costumes.


Many other Los Angeles group shows followed including the History of San Pedro Punk Shows at Angels Gate Cultural Center where people attended from all over the world to view the art and listen to bands over a months time. Many of Scott’s paintings as well as his Punk Flyers were shown. Many of the same artists from the Blatant Localism Show were featured as well as the then starting out Chet Zar who has gone on to be the king of the dark arts. 8/8/08 Saw the opening of the 3 man show “Strange World? Stranger Man!” At the Helix Gallery In Rancho Palos Verdes right off the coast overlooking the ocean. Featured artists: Scott Aicher, Aaron White, Saul White and Sorin. This was a wild show with paintings hung and painted directly on the walls. This was the show Scott put up a shelf with some of his painted bottles from his studio that later gave him the idea to open popkustomshoppe. Poems were read by Hudley from Flipside Fanzine and The Leeches played to a full packed house. (they wear trash bags and play synthesizers very loudly) Being inspired by attending Ed Roth’s Rat Fink Reunion at Melrose’s La Luz De Jesus and attending Robert Williams show there Scott began to make Kustom Culture inspired art. He introduced this style to his co workers at his day job designing surf wear.


A few years later his former art director invited him to attend his show at a new gallery called Gasoline that featured Kustom Culture Art. He was introduced to the owner who turned out to be an old punk skate friend from high school, Mark Waldman. He immediately told Scott to get some paintings done to show. At the time Gasoline was the Mecca for the genre often featuring the top names in Kustom Culture and filling the local El Segundo streets with bitchin hot rods and bikes. Scott has his own solo show there called “Retinal Stoke” which was a huge success. Following many successful shows at Gasoline Gallery Scott decided to fulfill a life long dream of having his own shop to sell his art work, clothing he designed, prints and vintage treasures from his personal collection. He called it Pop Kustom Shoppe. It had a four year run at Crafted (a craft mall in a refurbished amry supply warehouse in San Pedro, CA) His friend Mark Waldman asked him to be part of his new gallery El Cuervo Gallery In 2016 along with co owner Ralph Villalobos. He was in most every group show they had and even had is own solo show called “Space Truckin’ the art of Scott Aicher”.The show was met with great success and turn out with a feature in the Daily Breeze. My shop is now online on Etsy (PopkustomshoppeStore) a link can be found on my website (popkustomshoppe.com) as well as on my Instagram bio (popkustomshoppe)If you would like to buy my art, commission a painting or have me in your show you can email me at: popkustomshoppe@gmail.com

Update: I had a show at La Luz De Jesus! It was a book signing for "Everything that shines under the Hollywood Sign" by Iris Berry. I did all the illustrations for the book. We had a great show with poetry readings by Keith Morris of Off!, Black Flag and The Circle Jerks, Jack Grisham singer of TSOL (I also illustrated his book "Untamed" and the short story book "Code Blue" Untamed is still on sale on amazon but Code Blue has sold out (I have a few signed copies left if you are interested send me an email). D.H. Pleigro drummer for Dead Kennedys was there as was Annette Zilinakis of the Bangles and of couse Iris Berry was the star of the show. I have show posters from the show on sale now on my Etsy store sight just click here: SHOWPOSTER you can get the book on AMAZON HERE